What Is Tenting Via And Why It Is Important In PCB Fabrication?

With the development of electronic products and applications of finer pitch devices, vias play an important role in the interconnection between layers in a PCB. and vias are almost in every PCB design, there are many electronic designers considering them as a fairly simple, straightforward aspect of PCB. However, vias may look innocuous, making it complex to fabricate your PCB even to the PCB assembly process in certain circumstances.

There are many PCB manufacturer preferring the tenting method when placing vias, covering vias with different material allows them to conduct an electrical signal while dissipating any produced heat. Though tenting is not the only method, it’s common for PCB designers.

What is tenting via? 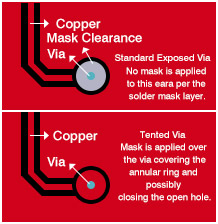 Needless to say, tenting via is the most popular and mature process in PCB fabrication, and tenting vias mean to cover the annular ring and via hole with solder mask, which is mainly in covering the annular ring to prevent exposure to the elements and reduce accidental shorting or contact with the the circuit. No special steps are taken to ensure the hole opening remains closed. Sometimes tenting vias will lead to the hole remaining covered but there is no guarantee, and smaller diameter vias (12mil diameter or less) have the best chance of remaining closed. However it will make an effect on the PCB fabrication process if there is not solder mask ink in the vias. With the introduction of dry film solder mask, tenting via is more easier. Tenting vias is useful wherever SMT pads are placed in close proximity to vias. It is particularly useful within BGA areas, where reworking shorts underneath the component is difficult and time-consuming.

Tips: If you make use of the tenting vias in your design, do a fabrication note either in a readme.txt file or Gerber fab drawing so that we can know you have intention to remove the mask clearances from some of your vias. Otherwise we may place the order on an engineering hold to verify your intention.

What does it mean to tent a via?

The vias are the holes in your PCB that allows signals to transmit from one side of the board to the other or from one layer of the board to another. In general, the vias are copper plated as the material is quite conductive, according to PCB designer, it may expose or cover the holes. So while the manufacturer covers the hole completely, it’s called either a masked or filled via, if the annual ring is merely covered over with the solder mask, it is called tenting the via. 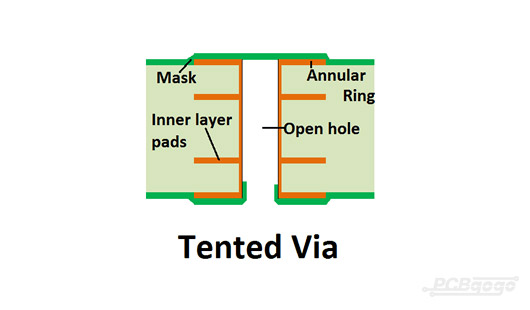 The advantages of tenting via

First of all, provide the solder mask to the vias as the protection. It can prevent the copper traces from oxidizing and corroding just like the solder mask, and the solder mask does the same thing for the via. So tenting via can make an effect on preventing any damages to the PCB layers.

What’s more, it can reduce the number of conductive components that are exposed to external elements with the tenting method. As left exposed, the elements can reduce the integrity of the components and result in corrosion. As well as play a role in reducing the possibility of a short from happening from solder bridging.

Why is PCB tenting via important?

PCB tenting vias is a common practice to protect printed circuit boards. It is often preferred over mask plugging or epoxy filling due to cost. Tenting a via with liquid photoimageable solder mask is the most cost-effective method of tenting. If you are concerned about the tenting being loose and exposing the annular ring, you can choose the more expensive resin filling.

The main goal of tenting via is to leave fewer conductive pads that are exposed on the surface of the board. Conversely, it means that there are fewer shorts during solder bridging in assembly. What’s more, tenting via also can reduce the paste migration from SMT pads, which will take place while drilling the vias on standard BGA “dog-bone”patterns or while the vias are on the edges of SMT pads. As well as tenting vias can make sure that the via won’t be damaged by exposure to the elements.

In general, tenting is more effective with small vias (diameter of 12 mil or less), so you need to consider closing the via instead with some kind of fill if you have larger vias that you need to protect. Obviously, it will not make an effect on conductivity with filling the vias because electrical travel through the copper plating is unimpeded.

Your PCB fabrication with tenting via in PCBGOGO

With over 10 years as an industry leader, PCBGOGO is one of the most experienced PCB and PCB assembly manufacturer in China. highly specialized not only in quick-turn PCB prototype and PCB assembly, but also medium and small volume PCB fabrication. Our engineers and production facility are equipped to deal with the intricacy this technique requirements with high accuracy. We use the technology of tenting via for many years, and we know how to make sure a reliable and safe production process. 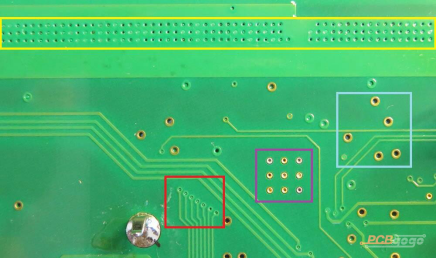 If you have any questions, or need more information on via in pad, please feel free to contact us with service@pcbgogo.com, we will be happy to help you.