PCB means Printed Circuit Board. It is used to connect electronic components mechanically and electrically. It is a non-conductive material with conductive lines printed or etched.

With the rise of PCB applications reaching far and high, designs for applications that extend beyond simple solutions for signal integrity are big developed. For many industries that have otherwise been inactive in the PCB world, developments in material technology, PCB producing capacities, and the increasing demands for PCB design.

What is a High-Current PCB design?

High-current PCB design is any design in which the physical characteristics of your circuit board, such as your layout, packaging, layer stack-up, interconnections, etc., begin to influence the integrity of your signals.

There are some types of PCBs:

1. It is the basic kind of circuit board, which contains only one layer of coating or base substance.

2. Double-sided PCBs, it is most common than single-sided PCBs besides, that they have two-sided ones.

3. Multilayer PCBs are difficult than double-sided PCBs which come with a mixture of single and double-sided boards.

4. In electronics, rigid PCBs are widely used to provide power to the circuits, make them hard and protect them from moving.

5. Flexible PCBs are supple and stretch and move into any shape based on need and requirement. 6. When several flexible PCBs are joining with a set of rigid layers, Rigid-Flex PCBs are created.

7. High-Frequency PCBs are rather different from conventional PCB and are efficient for one GHz transmission of signals.

There are some parts of high current PCBs:

Copper width is one of the basic parts that decided how much a current can hold. More current would be borne by traces of greater width. Commonly, for a board with regular copper thickness, it is a rule of thumb to expect a trace width of 1 mm per amp of current taken.

The real thickness of the traces that are on a PCB is copper thickness. Normally, the default copper thickness is 17.5 microns. It can be 35 and 50microns. The wider the thickness of copper, the less deep the trace must be to bear the same current. More increased copper thickness comes at an added expense but can help save space on your boards because the necessary trace width is much less with greater viscosity. The following two points are important for high current boards and should be looked at on the technical capabilities page of your manufacturer.

1. The thickness of copper for the outer layers - this will mean the top and bottom of the two outermost layers on your board.

Heat is the main factor that generated a high current track in PCB. It contributes to the longevity of the board and components. The loss of power in watts can be measured as the trace resistance multiplied by the square of the current that flows through it.

Electronics are an essential part of our lives nowadays. Form smartphones to home appliances we need electricity as it plays the main role. PCBs are the main factor of electricity. It is the basis of most electronic devices today. This versatility enables the operation of PCBs in many powers and applications. In more information below, we have discussed a few of these applications:

Electronics is a major contributor to the health-care industry, acting as diagnostic, control, and treatment systems. As electronics grow to become more powerful and compact, the medical uses of these electronic devices continue to develop, leading to countless new possibilities. To satisfy the specific constraints of medical equipment, PCBs within the medical industry is highly technical. Medical PCB, also referred to as HDI PCB, appears to be a high-density interconnect PCB specialty. Adjustable base materials can also be made from medical PCBs, allowing PCBs to flex during use, which can be necessary for both internal and external medical devices. In addition to compliance with stringent medical regulations, repeatability and reliability are two important qualities that medical PCB suppliers must attain. Here are some most common medical PCBs:

Control systems: The equipment is electronically controlled to regulate the mixture, flow rate, and immunity of fluid.

Smartphones, computers, and the many other consumer goods people use every day need PCBs to operate.  As electronics need more in our daily products PCBs became an essential part of our lives. Companies produce smaller and smaller smartphones and laptops with many unique technologies that involve tiny PCBs with large link volumes. PCBs are used in a wide variety of consumer goods, such as:

Computers and Laptop Computer used every field of life in the century.  PCBs is used in both desktop and laptop computer. They serve as the basis for many components of internal computers. All these components are directly connected to the motherboard which is also a PCB. To work, all kinds of marine vessels and systems depend on PCBs. This includes small boats, large cargo ships, warships, navigation equipment, and communications systems.

PCBs are used in every safety appliance. Such as electronic door locks, security cameras, and smoke detectors, etc.

In military applications, the PCBs used must be exceptionally reliable and safe. They may be exposed to extreme circumstances and may play a role in national security. Due to their ability to withstand tough conditions, such as elevated temperatures, the military uses materials such as high-temperature laminates, aluminum, and copper.

Here are different advantages of PCBs such as:

Engineers at PCBgogo are highly specialized not only in quick-turn PCB prototype and PCB assembly, but also medium and small volume PCB fabrication. PCBgogo has three factories, established over 17,000 square meters; fully compliant with the ISO 9001:2015 quality management system, UL certified and committed to adhering to the strictest standards in manufacture and assembly. The company is operating since 2017, PCBgogo has delivered over US $50 million worth of electronic components and prototyping services to more than 100 thousand customers all over the world. 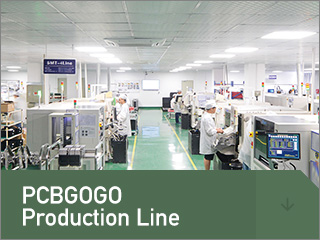