Due to the huge increase in the complexity of the hardware, it was so hard or impossible to depend on the old or traditionally techniques in the PCB manufacturing, for example how to transfer a large amount of current between the PCB layers, or how to exchange the signals between the different layers and how to insure that the soldering process will end without any problems when the PCB board is full of a huge number of components which are separated with a fraction of millimeter sometimes. All of this need some of non-traditional solutions and perfect processes to insure your board is fabricated probably, here are three of the most used techniques that solve the mentioned challenges:

First thing, we have to know in brief what is the Via and how does this Via solved many challenges that help in compressing the size of hardware and also improving its functionality.

The Via in short words is about a tunnel or a hole that conducts between the traces from a different layers, by looking to the below image it is clear that there are different types of Vias depending on which layers the via is connecting between, the Via is the magical solution to create a linking among all layer as if you are working with one large connected layer but with a smaller size of one multi-layer PCB, and the more layers are used the smallest PCB area will be needed but of course there is a limitation point but it is not our subject now. 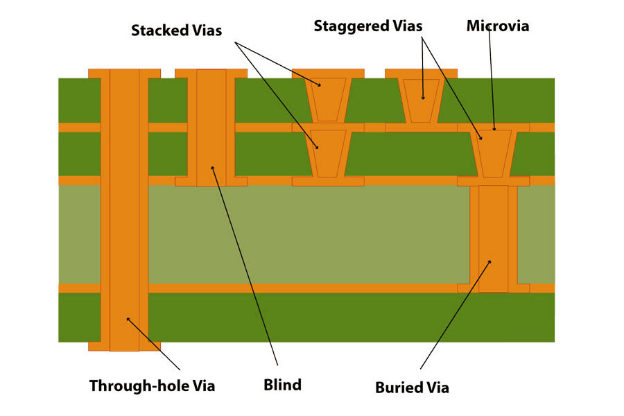 So, what is the Via tenting and why may we need it?

Actually, we will answer the first part of the question and you will be able to answer the second part yourself, as you may know that the copper metal surface is tending to catch the molten solder when they just touch each-other, so for example if you are working with BGA (Ball Grade Array) and using “Via dog bone style routing” and of course you need to avoid any kind of miss-touching between the Vias during soldering process and also you want to prevent the Vias to be filled with the solder paste or when you are working with vias that are close to any component that will be soldered,  or even when we need to use the “wave soldering technique”; then it is so important to prevent the molten solder to fill the through holes in this stage of process, and finally when there is a need to  protect the outside part of the via from copper oxidation or corrosion, now it is clear why we need “Via tenting” technique and it is time to have a brief definition for it.

“Via tenting” is the process of covering the annular ring and via hole with solder mask that works as a good isolation between the molten solder or the solder paste and the Vias themselves to prevent Vias from filling of solder paste or molten solder and to protect it from copper oxidation or corrosion. 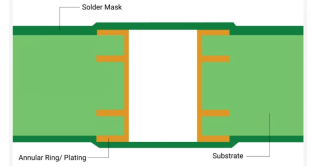 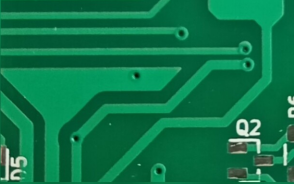 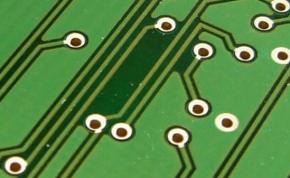 It is a similar technique for Via tenting in terms of functionality that aims to cover the annular ring and Via hole but this time using solder resist ink or what is known by (LPI) which stands for “Liquid Photo Imageable” (a liquid solder mask). A “Drilled ALU sheet” is used to direct and push the LPI into Vias holes that is needed to be filled and covered, the second main deference between this technique and Via tenting technique is that the Via is filled completely with non-conductive paste. It is noteworthy in this technique that it has two types, “Filled and covered Via” and “Filled and Capped Via”, and it is suitable when the target is to insure the filling of the Via as it has a high level of insurance as a process.

“Filled and covered Via”

In this type, the Via is completely filled with non-conductive material (ex: Epoxy, Resin) and covered with solder resist ink (LPI) either from one side or from the both sides.

Figure 5 Filled and covered Via - one side

Figure 6 Filled and covered Via - two side

“Filled and Capped Via”

“Drilled ALU Sheet”: It is a solid Aluminum drill entry sheet specifically manufactured for use in drilling all single sided, double sided and multilayer circuit boards. 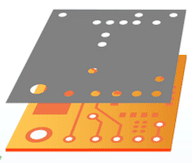 This type is mostly used with BGA, as to reduce the complexity of routing. It normally uses the “Via in Pad” technique because it gives more spaces for routing, which make the matter easier. When it is desired to keep the pad plate not covered because of soldering reason, and at the same time we need to prevent any unwanted poor conductive filling to the Via hole by the solder paste or the molten solder, in these cases “Filled and Capped Via” is the right solution, as it keeps the existence of the metallic surface of the pad at the same time of having a Via exists under this plate.

Figure 7 Filled and Capped Via

Also, it is noteworthy that sometimes a conductive material is used to increase the capacity of current conductivity when this is needed. 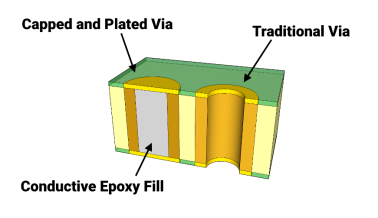 Figure 8 Filled and Capped Via

The main difference between this technique and the via filling technique is that here the via is not completely filled but it is partially filled with the filling material so, let us say that it is “Closed” not “Filled”. The closing process of via hole is made using a non-conductive material (ex: Epoxy, Resin). It has two types depending on whether it is covered by the solder resist ink (LPI) or not, also it may be closed and covered from only one side or closed from the both two sides:

1- Plugged via: the Via here is closed (partially filled) with the non-conductive material without any solder resist ink (LPI) covering its surface.

“Via in pad”: It is the design practice of placing a via in the copper landing pad of a component and the Pad in this case is called “Active Pad”.

Figure 9 Via Plugged from single side

Figure 10 Via Plugged from Both sides

2. Plugged and covered Via: the Via here is closed (partially filled) with the non-conductive material. In addition, it is covered by the solder resist ink (LPI).

Figure 11 Via Plugged and Covered from Single side

Figure 12 Via Plugged and covered from both sides