Every electronic device we use today is susceptible to electromagnetic interference (EMI). A printed circuit board (PCB), integrated chips, interconnect, and I/O cables comprise an electronic system. At high frequencies, the interconnects tend to act as antennas, resulting in EMI, depending on the length of the interconnects and the current carried by the conductors. These EMI radiations interfere with other devices in the area. International standards exist to limit the level of emissions. As a result, measuring and controlling electromagnetic radiation is critical.

Various strategies can be used to reduce electromagnetic interference (EMI) on a PCB board. The various aspects must be considered and handled properly.

A trace is any path that carries electricity from the driver to the receiver. These traces can create an antenna when they bend or cross, which can result in EMI. It is advised to separate all signals from other traces because of this. It assists in minimizing crosstalk (prevent unwanted transfer of signals between the systems).

2. Avoid right angles and take a 45° turn instead: When a trace comes into contact with a 90° curve, the capacitance rises, changing the characteristic impedance value and causing reflections. By substituting 45° turns for acute bends, it can be prevented. 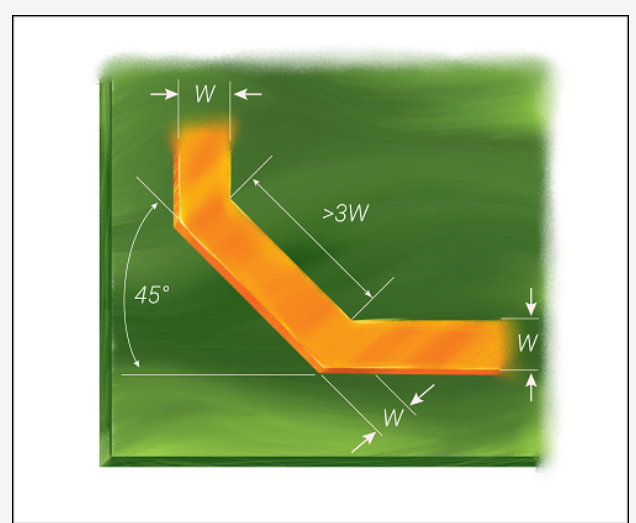 3. Careful use of Vias: Vias are utilized on multi-layer PCBs for signal routing, so use them like an expert. A good designer must be aware of the capacitance and inductance effects that each via has. Therefore, essential traces should be routed on the same layer and vias should be avoided wherever possible. Reflections are caused by an impedance mismatch between the via and the trace, which is caused by the parasitic capacitance and inductance in the vias. When vias are unavoidable, care should be taken to position the ground vias close to the signal vias. By referencing the signals to linked grounds, this prevents changes in the characteristic impedance value and, consequently, reflections. The same number of vias should be placed in both traces of differential pairs where vias cannot be avoided. It is also critical to account for any signal delay caused by a via. This can be accomplished by using the same number of vias in both legs of the differential pair or by incorporating serpentine routing on the leg lacking a via.

4. Careful use of traces: As you may be aware, high-speed PCBs frequently suffer from EMI issues. Long traces that form transmitting or receiving antennas can pose an EMI risk. Longer traces also cover more distance, increasing the likelihood that sensitive circuits will be affected along the way. Using short, direct-path traces will help reduce EMI risk from both antennas and trace proximity. No one intentionally routes a trace so that it acts as an EMI antenna, perhaps a high frequency changed the impedance of a capacitor, or a return current caused an unexpected loop in the ground plane. Whatever the reason, shortening traces is the best way to reduce antenna radiation. Because antennas can transmit and receive, traces in both "noisy" and "quiet" circuits should be cut. A smaller antenna will always emit or receive less signal than a larger one. Traces aren't the only things on the PCB that can emit EMI. When a trace crosses through a gap in the ground plane, it acts as an antenna. Keep traces short and direct, but not at the expense of crossing ground plane gaps. It is important to note that when routing a differential pair, make every effort to keep their traces parallel. Parallelizing a differential pair helps cancel out any radiated EMI and aids in trace length matching.

The ground plane delivers the lowest inductance value when the signal returns to the source from the load, hence use the entire ground plane. Even though a ground needs its own PCB layer, a two-layer PCB may not always allow for this. In these cases, designers utilize ground grids, where each grid's inductance is dependent on the spacing between them. There should be the same number of vias in both traces.

In some mixed-signal designs, an effort is made to keep analogue and digital circuitry apart in order to prevent electromagnetic interference (EMI). However, having two completely independent grounding planes could result in different references for some circuit components. Your circuit may have faults as a result. A ferrite bead and Schottky diodes can be used to connect different ground planes in circuits using a single data converter. However, the two grounding planes can be combined for more universal systems, or only one plane can be used. This is provided that the return paths of the AC and DC currents do not intersect, as this would result in "crosstalk." It is strongly advised to use a single, sturdy ground plane, preferably with well-considered current return pathways.

Mixed-signal system grounds necessitate careful distribution planning because return paths must be checked to reduce EMI and "crosstalk." When everything looks the same, distribution planning becomes extremely difficult. I recommend that you colour code your components and nets in your PCB design software so that you can visually separate AC and DC systems, or pins if you're working with mixed-signal ICs.

Some components, particularly small, high-speed parts, will generate EMI regardless of design rules. Fortunately, shielding and filtering can reduce the effects of EMI. Shields are especially useful for isolating components from EMI that may occur elsewhere on the PCB. They are most commonly used over RF outputs, as well as inputs and amplifier stages, because these are the sections of a circuit that are most likely to be affected by/cause EMI. To isolate the RF module and amplifier from other noise in the circuit, it is important to use a shield.

Enclosure: Physical shields are metallic packages that encase an entire board or a portion of it. Their goal is to prevent EMI from entering the board's circuitry, though the specific methods vary depending on the source of the EMI. Component shields can be used to encase a specific component that produces EMI, allowing it to connect to ground, reducing the antenna loop size, and absorbing EMI. To protect against EMI from outside sources, other shields may encase the entire board. Typically, these devices are made of metal or conductive foam.

Cables: Cables that carry analogue and digital currents generate the most EMI problems. They cause these problems by generating parasitic capacitance and inductance, which is especially problematic for high-frequency signals. Fortunately, shielding these cables and connecting them to ground at both ends helps to cancel out EMI interference.