Most of the time digital circuits need discontinuous current, which would generate inrush current.

And there must exist parasitic inductance, parasitic resistance, and parasitic capacitor in the high-speed circuit, so eventually, the high-frequency noise would be coupled into other circuits. Because parasitic inductance will decline the maximum inrush current capability that can be withstood, and then cause some parts pressure to drop, and the circuit may be disabled.

Therefore, it is particularly important to add bypass capacitors in front of digital devices. The larger the capacitor is, the more energy it transmits is limited by the transmission rate, so a large capacitor and a small capacitor are generally combined to satisfy the full frequency range.

So, we should try our best to avoid this situation when setting the vias, so as to avoid the plane being split, which will eventually lead to EMC problems.

Usually the best way to avoid hot spots is to place vias in a mesh pattern, so that the current density is uniform, and the planes are not isolated, the return path is not too long, and there is no EMC problem.

2. Ways to Insert a Bend in Traces

When laying high-speed signal lines, the signal lines should try to avoid bending. If you have to bend the trace, don't run it at an acute or right angle, but use an obtuse trace.

When laying out high-speed signal lines, we often use serpentine lines to achieve equal lengths, and the same serpentine lines are actually a kind of bending. The line width, spacing, and bending method should be selected reasonably, and the spacing should meet the 4W/1.5W rule.

In fact, if the space is enough, try to increase the distance between the two high-speed signal lines.

A long stub line is equivalent to an antenna, and improper handling can cause serious EMC problems.

At the same time, the stub line will also cause reflections, reducing the integrity of the signal. Usually, when a pull-up or pull-down resistor is added to the high-speed signal line, it is most likely to generate a stub line, and generally, the stub line can be routed in a daisy chain.

According to experience, if the length of the stub line is greater than 1/10 wavelength, it can be used as an antenna, which will become a problem at this time.

The impedance value of a trace generally depends on its width and the distance between the trace and the reference plane. The wider the trace, the lower its impedance. In some interface terminals, which are also the pads of the device, the same principle applies.

Therefore, in order to solve this problem in general, a forbidden copper sheet is placed under the interface terminal or the large pad of the device, and at the same time, the reference plane of the pad is placed on another layer, thereby increasing the impedance and making the impedance continuous. 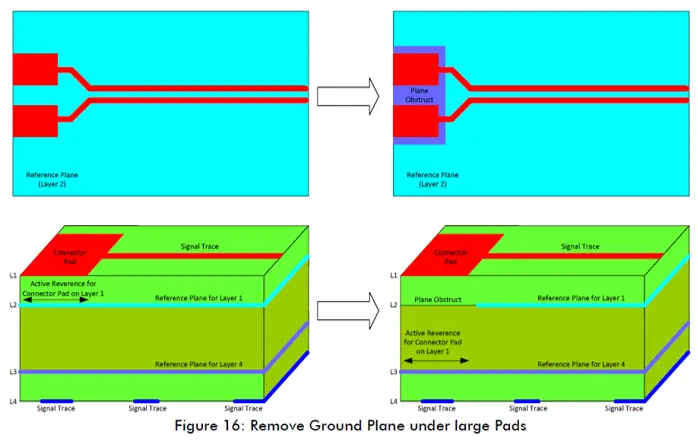 Vias are another source of impedance discontinuities. To minimize this effect, the unwanted copper layers connected to the inner layers and vias should be removed.

In fact, such an operation can be used to eliminate unnecessary copper sheets through CAD tools during design or contact the PCB processing manufacturer to ensure the continuity of impedance.

Typically, vias create huge impedance discontinuities, so for high-speed differential signal pairs, minimize vias, and use vias symmetrically if they are to be used.

In some high-speed signal interfaces, such as a bus, it is generally necessary to consider the arrival time and skew error between the signal lines. For example, the arrival time of all data signal lines in a group of high-speed parallel buses must be guaranteed to be within a certain time delay error, so as to ensure the consistency of its setup time and hold time. To meet this need, we must consider isometrics.

The high-speed differential signal line must ensure a strict time delay between the two signal lines, otherwise the communication is likely to fail. Therefore, in order to meet this requirement, the serpentine line can be used to achieve the same length, thereby meeting the time delay requirement.

Serpentines should generally be placed at the source of the elongation, not the distal end. Only at the source can the signals at the positive and negative ends of the differential line be transmitted synchronously most of the time.

If two traces are bent and the distance between them is less than 15mm, the loss of length between the two will compensate each other, so there is no need to do equal-length processing at this time.

Must be of equal length. Because a lot of EDA software only pays attention to whether the entire trace is not long during DRC.

Whenever possible, choose symmetrical routing to avoid the need to end up serpentine routing for equal lengths.

If space permits, try to compensate by adding a small loopback at the source of the short differential line instead of serpentine. 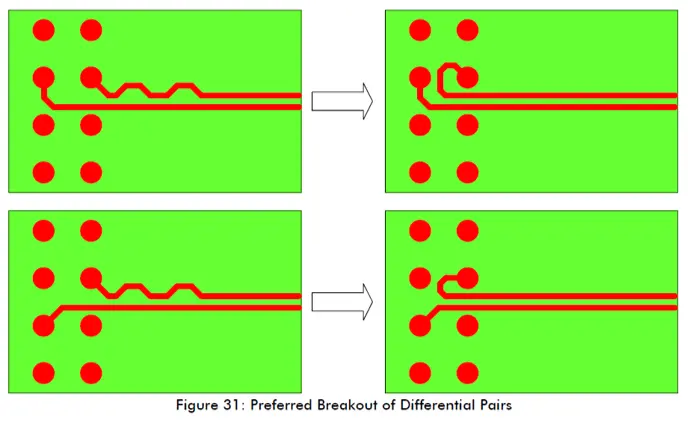