The popularity of IoT PCBs keeps increasing by the day in the technology space due to the huge benefits they offer in modern technology. IoT PCBs have several applications in the tech industry, making their demand soar by day. It is important to understand how this revolutionary technology works so that its full potential can be realized. This article aims to help you increase your knowledge about IoT PCBs. It contains super useful information about these PCBs that will help broaden your knowledge.

What is IoT PCB?

IoT is an abbreviation for the internet of things. Internet of things simply means a network of electronic devices uniquely designed to communicate with other devices on the internet. This is made possible because these devices are built with sensors, software, and other technologies. A typical example of the internet of things is connecting your mobile device to your fridge to view inside your fridge via an installed app on your phone. Even when you are away from home, this technology can help you know the content of your fridge so you can shop for items you don’t have. You can as well track or monitor your home by connecting your phone to your CCTV camera. 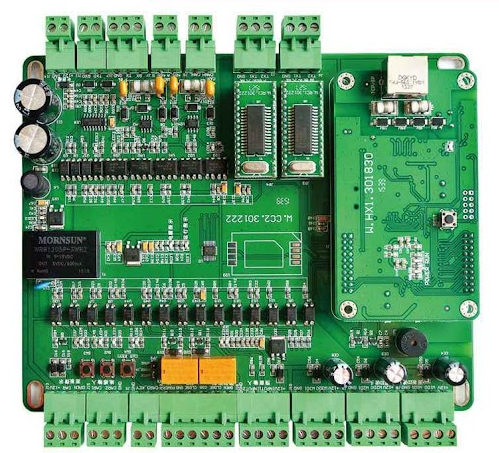 The device layer forms the base of the IoT architecture. It comprises sensors, actuators, and gateways. These devices gather information and transmit it to the next layer for processing to continue. The information transferred by the device layer is done through wireless connections like WIFI, Bluetooth, etc.

The edge layer consists of data processing, filtering, and aggregation devices. They receive data and information from the device layer, further process them, and transmit them to the cloud layer.

This layer stores and disseminates the processed data and information. Authorized users can access the information by downloading it or displaying it on a screen. The IoT architecture is not limited to the above layers as some systems can have more layers to highlight further internal processes. 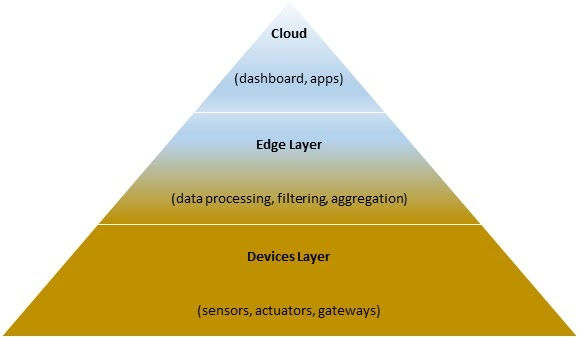 You may be wondering why the use of IoT PCBs is ever-increasing and gaining so much popularity. This is because they present several advantages in their applications across different industries. Among the many advantages of the IoT PCBs are as follows:

One unique advantage of the IoT PCB is that it occupies a very little board space giving it a small size or form. The thin components used for their construction allow it to support denser circuits in the IoT device. This makes it possible for components like microphones, batteries, satellites to fit in a small package without hindering their capabilities.

The small size of IoT PCB leads to a massive reduction in the overall weight of the IoT device. This makes IoT devices super light, which is a unique advantage for modern technology.  Most IoT devices are portable, easy to carry around, and can even be worn on the body.  The small form and lightweight nature of IoT PCBs also make them comfortable for IoT device users.

IoT PCBs can withstand harsh environmental conditions in various industries. They can function in such unconducive environments without breaking down. This is primarily due to the high-density HDI PCBs used for making them, which makes IoT devices highly durable and capable of resisting stress in harsh environments.

IoT PCBs make use of simple wiring connections. This helps to avoid complex mechanical and electrical connectors and offers a huge benefit for IoT PCBs by making them highly functional.

Various components come together to form the IoT PCBs. To develop well-functioning IoT devices, you must understand these components and their roles in the IoT system. Below are the various IoT component types:

The first IOT PCB component is the sensor. Sensors play a unique role in the IoT PCB system. They collect data, information, and perform important tasks in the IoT system. Sensors used for IoT PCBs come in different forms but the most popular ones include a temperature sensor, pressure sensor, humidity sensor, IR sensor, camera, and RFI tag.

The third component of the IoT PCB is the power management system. This system helps to manage and regulate power flow in the IoT PCB. Because the various components of IoT devices are in constant communication with their network, special attention should be given to their power system so it lasts. For IoT devices that use batteries, the PCB should be carefully designed for efficient power usage. One way to achieve this is by using voltage regulators with minimal quiescent power.

IoT PCBs have tons of applications across various industries. They can be used for smart home supplies, smartwatches, smartphones, car dashboards, etc. Below are some other popular applications of IoT PCBs. 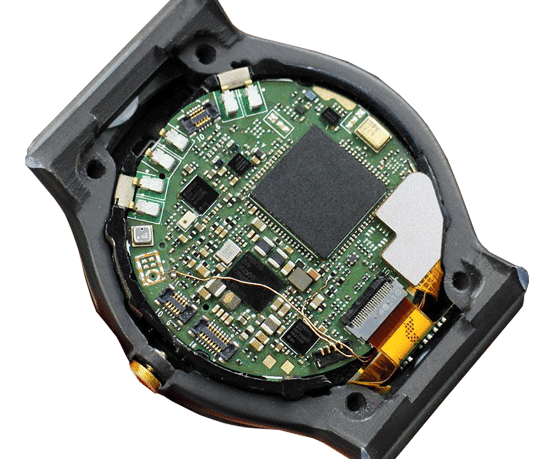 A well-functioning and efficient IoT device require an accurate board design. To achieve this, there are certain important considerations you need to make.

The first important thing you need to pay massive attention to before designing is the size of the IoT board. IoT devices need to have small boards since they are portable and worn on the body. Most modern devices are moving towards small forms. Gone are the days where designers had large board space for their PCB designs.

To achieve this goal of creating small-sized IoT PCBs, you need to strategically place tracks, vias, and components on IoT boards. You can do this by using HDI boards and rigid-flex for maximum flexibility and functionality on smaller boards. For these small boards, it is super important for all IoT device designers to be on the same page throughout the design period.

Aside from the size of IoT PCBs, you also need to make sure your PCB design easily fits its intended device. A sure way to achieve this is by doing enough virtual prototyping. For the best functionality of the IoT PCB, you will need to use non-traditional materials for the circuits.

When designing your IoT PCB, you will need to pay close attention to its adaptability. This means your PCB should be able to adapt or suit human body temperature, moisture, and steady movement. One way to achieve this is by subjecting your PCB to thorough simulation tests.

The issue of adaptability should only be a concern if the IoT device will be worn on the body or will make body contact. You need to consider the thermal effects of the IoT device when designing. The board should be designed to enable sufficient cooling when necessary.

One key functionality of the IoT device is its ability to gather and send data to its network via the internet. This function requires wireless connectivity. This means you need to install the necessary wireless modules and RF circuit components. When choosing the right circuit components, you will need to consider the power consumption, security needs, network 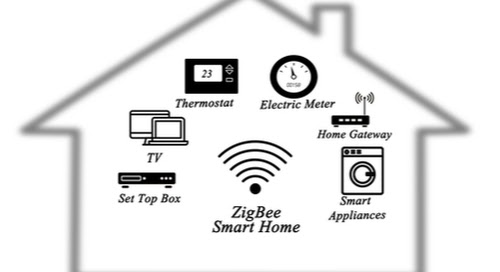 Another crucial factor you need to consider during the designing stage is the power consumption on your board. The components of IoT boards are in continuous communication with each other. Also, IoT devices constantly transfer data with their network and this makes the device’s power deplete faster. To help curb this situation, there should be an extended battery life for IoT devices.

In addition, you need to ensure that power usage within the various circuit layers is kept to a strict minimum. This will ensure the overall power consumption in the IoT device remains at low levels. Therefore, you need to plan strategically the device’s power consumption and also conduct thorough testing of your PCBs tasks cycles. This should include sending and standby power states.

You need to be extremely mindful of the reliability of your IoT PCB when designing. IoT PCBs should be able to withstand a harsh working environment without breaking down. You need to use highly durable materials for your IoT PCBs to make them reliable.

Industry designing standards should be followed to ensure the PCBs last long.

Throughout the designing stage of your IoT PCB, it is crucial to maintain proper communication with other designers so that you will all be on the same page. This may involve a lot of time or delay the completion of the final design. But this will be worth the time considering the ever-increasing higher demands for IoT devices and their important functionalities. 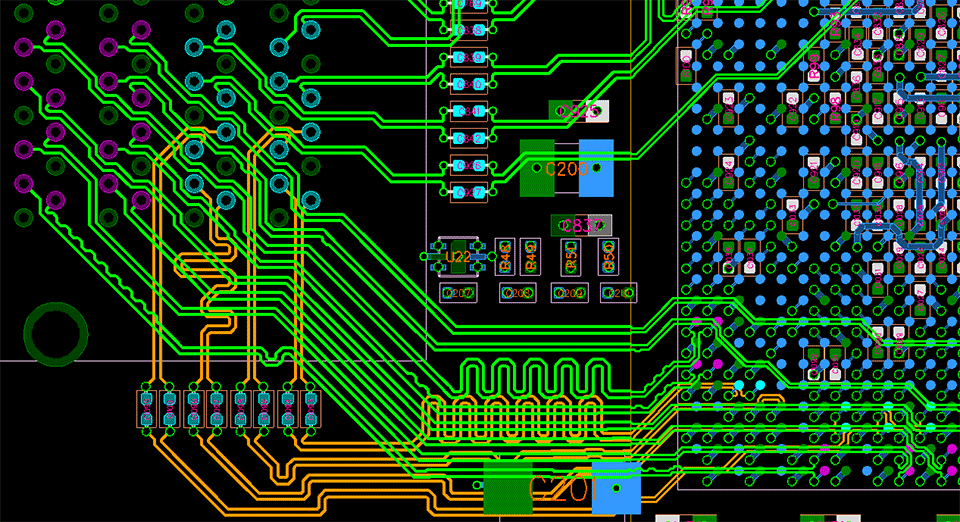 The design freedom offered by HDI and flex PCBs help to eliminate the size and shape concern of various PCB applications. What’s more, they offer optimal functionality and durability. HDI PCBs are high-density interconnect PCBs made of high-performance and super thin materials. As the size of devices in the technology space keeps decreasing with speed, HDI PCBs allow you to design small-sized PCBs for various IoT devices. They can be densely packed or stacked together to form IoT PCBs of any size, eliminating the need for complex wire connections. On the other hand, the flexible nature of flex PCBs gives you the freedom to design IoT PCBs of any shape.

This article has offered you vital information on IoT PCBs. We looked at crucial subjects like the architecture of IoT PCBs, their advantages, components, applications, and the design requirements of IoT PCBs. You also learned how combining HDI and flex PCBs helps design PCBs of any size and shape. We hope you’ve learned a lot about IoT PCBs and they have helped broaden your knowledge of this amazing technology.

If you are looking for the best IoT PCB solutions, PCBgogo is your number one choice. As one of the best PCB manufacturers in China, PCBgogo offers top-quality and reliable IoT PCBs for various IoT devices. We have a state-of-the-art facility with best-in-class machines and unmatched expertise to help get your desired IoT PCBs. Feel free to contact us now for the best IoT PCBs for all your IoT devices at an amazing short turnaround.